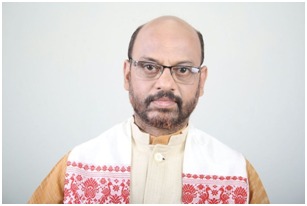 Hitendra Nath Goswami is currently the Speaker of the Assam Legislative Assembly. He assumed office on 30 January 2017. He is a member of the Bharatiya Janata Party, which he joined on 10 March 2014 in New Delhi.

Born on January 1, 1959, he was a former Minister in the Prafulla Kumar Mahanta-led Asom Gana Parishad Government. He resigned from the party membership of Asom Gana Parishad on 16 February 2013. He is a Legislator with administrative experience and good oratory skills.

Hitendra Nath Goswami is the sixth among eight siblings of Late Srinath Deva Goswami and Late Smt. Rambha Goswami. His Father was the Satradhikar of Madhu-Mishra Satra and a prominent citizen of Jorhat. He is married to Smt. Malabika Goswami and has a daughter. His hobbies include traveling and reading books. He has traveled to different parts of India, Canada, and Bangladesh. He enjoys watching cricket, football, and tennis. He is the Founder Conveyor of the North East Region Students Union (NERSU). The spirit of commitment to society with honesty, integrity, and humanity can be perceived from his interest in child development and upliftment of the poor deprived section.