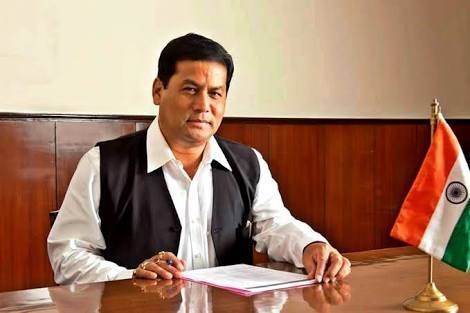 Sarbananda Sonowal is the 14th Chief Minister of Assam and has assumed office from the 24th May 2016. With a landslide victory in the 2016 Assam Assembly elections winning 86 of the 126 seats, he was sworn as the Chief Minister in the first ever Government of the Bharatiya Janata Party (BJP) in the state in the presence of Shri Narendra Modi, Hon'ble Prime Minister of India and a host of other dignitaries.

He is a dynamic leader who demonstrates the qualities of passion, energy and commitment and commands respect from the youth across the State for his firm and prudent views on various issues.  As an ardent member of the Bharatiya Janata Party (BJP), he represents the Majuli constituency in State Legislative Assembly of Assam.

Sarbananda Sonowal was born on the 31st October 1962 to Shri Jibeswar Sonowal and Smti. Dineswari Sonowal. His place of birth was in Mulukgaon in the Dibrugarh district of Assam. He completed his Bachelor Degree with English Honours from Hanumanbaksh Kanoi College under Dibrugarh University and his LLB from Gauhati University.  As a passionate sportsman, he is a keen enthusiast of football, cricket and badminton.

Sarbananda Sonowal started his career as a student leader. He was the President of the oldest student body of the state, the All Assam Students Union (AASU), from 1992 to 1999. He was also the President of North East Students Organization (NESO) from 1996 to 2000. He started his active political career as a member of Asom Gana Parishad (AGP), a regional political party.

In 2001, he was elected as MLA from Moran Assembly Constituency. In the 2004 General election, he contested from prestigious Dibrugarh Constituency and became a Member of Parliament (MP), Lok Sabha. In 2005 he was appointed as a Member, Consultative Committee, Ministry of Home Affairs and in 2006 as Member, Consultative Committee, Ministry of Commerce & Industry and continued as a Member of Parliament till 2009 before joining Bharatiya Janata Party in 2011. In the same year he was appointed as National Executive Member of Bharatiya Janata Party and also as State Spokesperson and General Secretary for Assam Bharatiya Janata Party.

Sarbananda Sonowal was appointed as the President of State unit of Bharatiya Janata Party in 2012. In 2014 he was appointed to head the 16th Lok Sabha Elections in Assam. He was credited with raising the party's tally to seven from the earlier four in the 2014 Parliamentary polls. In the same Parliamentary Polls, he was also elected from Lakhimpur Constituency as Member of Parliament (MP) Lok Sabha and he was appointed as Union Minister of State-Independent Charge for Youth Affairs and Sports.

During his tenure as Union Minister, he was the driving force behind bringing many significant sports events to Assam and North Eastern Region. This includes, the 12th South Asian Games held simultaneously in Assam and Meghalaya. It was the first ever International event held in this part of the country.

The 19th National Youth Festival was held at Guwahati, Assam, from 8th to 12th January 2015. The theme of the festival was "Youth for Clean, Green and Progressive India". Around 5000 Youth delegates from all over the country participated in the festival. Similarly, 4th North East Youth Festival was held in Majuli. Besides, a proposal for setting up of National Sports University at Manipur was also mooted during his tenure and decision was taken to set up an Indian Institute of Sports Science & Research. Digitalization of SAI had also been initiated under his leadership and a new Scheme called "National Sports Talent Search Scheme (NSTSS)" was formulated for identification of talent in the field of sports among students in the age group of 8 to 12 years and also nurturing of sports talent at the district level Sports school/Centre Sports school/National Sports Academies.

Under the leadership of Sarbananda Sonowal as the Chief Minister of Assam, the Assam Global Investors' Summit or Advantage Assam Global Investors' Summit held on 3rd and 4th February 2018 was a triumphant economic summit organized by the Government of Assam. The main aim of the summit was to increase the trade and other relations with Southeast Asia. In the two day event as many 200 MOUs were inked and investment proposal to the tune of Rs 1, 00,000 crores were committed with a focus on investing in different sectors like Power, Agriculture & Food Processing, IT & ITeS, River Transport & Port Townships, Plastics & Petrochemicals, Pharmaceuticals & Medical Equipment, Handloom, Textiles & Handicrafts, Tourism, Hospitality & Wellness, Civil Aviation and Petroleum and Natural Gas.

Sarbananda Sonowal came in the spotlight when he got the contentious Illegal Migration (Determination by Tribunal) Act, 1983 struck down by the Supreme Court of India in 2005. The Act was one of the biggest obstacles to deportation of Bangladeshi immigrants. The court held the view that the Act was unconstitutional and termed Bangladeshi infiltration an "external aggression". It further gave the directive that Bangladeshi national who have crossed the border illegally, have trespassed into Assam, or some other part of the country, have no legal right to do so and are liable to be deported.

Is there anything wrong in this page?

Is there anything wrong in this page?

If you spot anything wrong with the page or have an idea to improve the page, tell us about it.